The railroad came to Parsons from Thomas in 1989 and was built by Henry Gassaway Davis and his son-in-law Stephen B. Elkins.  The railroad was used to haul timber and coal.  At this time the railway was called West Virginia Central and Pittsburg Railway Company.

The railway was used mostly for hauling coal and timber.  The first passenger train ran from Thomas to Parsons April 1, 1889.  The last passenger ran in 1958.  The train was still used to haul coal and several businesses used it for shipping.  The Woolen Mill, Armour and Leather Tannery and Southern States were a few that used it for their businesses.

Some interesting facts are; Robert Eastman from Davis brought a group of about seventy men to Parsons by rail to join with the large group already assembled to go to Saint George to get the records from the Court House (our county seat) to Parsons.  That was five days before Parsons was to become the new county seat.

President Franklin D. Roosevelt gave a “whistle stop” speech from the back of the Presidential Train at the Depot in the 1930’s.

In the 1920’s and 1930’s there was a park located beside the depot where Sheetz and McDonald’s are located was visited often by the citizens of Parsons.  It has been said that people came mostly when the passenger trains arrived so that they could see who was coming into town and who was leaving.

The rails were removed after the Flood of 1985 and the property with the depot was given to the Tucker County Historical Society.  They sold the building to Shirley Summerfield who later sold it to the Heritage House.  PRO (Parsons Revitalization Organization) acquired the building and property and turned it over to the Tucker County Historical Society.  They are in the process of restoring it and using it for a museum. 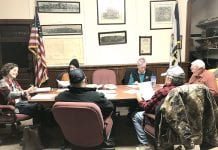